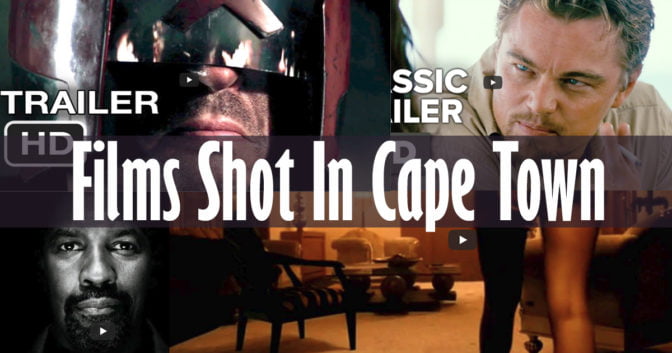 Cape Town, because of it’s beautiful and character-rich landscapes, is becoming a popular location to shoot scenes for films.

Here is a list of Movies you might not have known has scenes that were shot in Cape Town.

Do you know any others? Let us know in the comments!

“In a violent, futuristic city where the police have the authority to act as judge, jury, and executioner, a cop teams with a trainee to take down a gang that deals the reality-altering drug, SLO-MO.”

“Based on the video game series of the same name. The story revolves around Agent 47, a professional hitman, who was engineered to be an assassin by the group known as “The Organization”. He becomes ensnared in a political conspiracy and finds himself pursued by both Interpol and Russian intelligence.”

“Jonas (Brenton Thwaites) lives in a seemingly idyllic world of conformity and contentment. When he begins to spend time with The Giver (Jeff Bridges), an old man who is the sole keeper of the community’s memories, Jonas discovers the dangerous truths of his community’s secret past. Armed with the power of knowledge, Jonas realizes that he must escape from their world to protect himself and those he loves — a challenge no one has ever completed successfully.”

“Newly elected President Mandela knows his nation remains racially and economically divided in the wake of apartheid. Believing he can bring his people together through the universal language of sport, Mandela rallies South Africa’s underdog rugby team as they make an unlikely run to the 1995 World Cup Championship match.”

“Andrew is a socially awkward, introverted teen whose main form of escape and expression is a video camera. But things begin to change when Andrew, his cousin Matt and popular classmate Steve discover a mysterious substance that leaves them with incredible powers.”

“When a CIA-operated safe house is targeted by a group of bad guys, the facility’s house-sitter is tasked with the dangerous job of moving the criminal who is being hidden there to another secure location.”

“As civil war rages through 1990s Sierra Leone, two men, a white South African mercenary and a black Mende fisherman, become joined in a common quest to recover a rare gem that has the power to transform their lives.”

“In the epic finale to the Maze Runner saga, Thomas leads his group of escaped Gladers on their final and most dangerous mission yet. To save their friends, they must break into the legendary Last City, a WCKD-controlled labyrinth that may turn out to be the deadliest maze of all. Anyone who makes it out alive will get answers to the questions the Gladers have been asking since they first arrived in the maze.”

“Arturo Bandini (Colin Farrell) is a writer who moves from Colorado to Los Angeles with aspirations of completing a great novel. There he meets bold Mexican waitress Camilla (Salma Hayek). She wants to live a better life and thinks marrying for money may be her answer. Arturo, who tries to project a confidence that he is inwardly lacking, initially acts coldly toward Camilla. Despite not seeming like a viable match, a romance gradually develops between the two.”

Make sure you like our Facebook Page for more Awesome Cape Town News, views, pics and Videos: