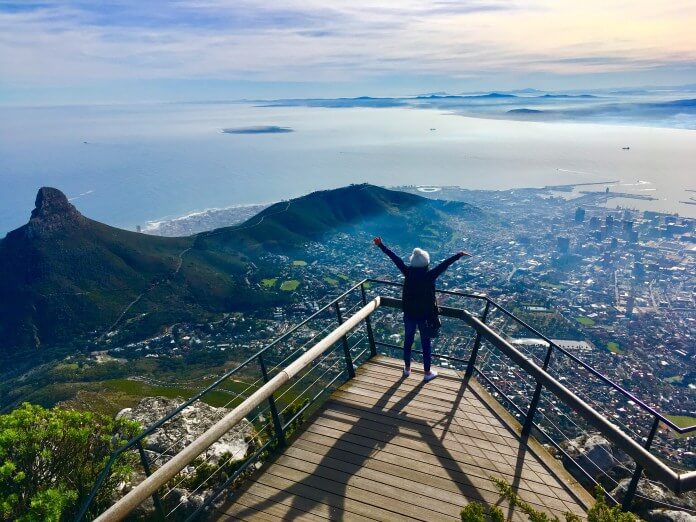 Recently, seasoned traveller and international travel blogger Christine Rogador visited the mother city for business.  Below is Christine’s awesome list top 10 of the things to do in Cape Town with photos and a video included. Scroll down and enjoy the journey

A few months ago, I didn’t want to go to Cape Town. It’s nothing personal but I wasn’t in the mood to travel after buying my own place in Manila. I thought I wanted to settle a bit in the city so I could enjoy my own place after moving between hotels, hostels, guest houses and apartments for the past 1 year. But after 3 weeks of enjoying my new place, I was off on a flight that took me to my 4th continent and the city that I never thought would surprise me. So here are the 10 cool things to do in Cape Town – the city that I consider my number 1 favourite right now.

1. Take a cable car up to the Table Mountain.

Taking a cable car up to the mountain will cost you about $20 for a round trip ticket. But it’s worth it for the steep hike that you have to endure and your time if you want to climb up the Table Mountain. The cable car also gives you the opportunity to see the city in 360 degrees while you climb up or down the mountain. And that’s 360 degrees of Cape Town’s awesome nature and landscape.

The thing about Cape Town is it has an amazing landscapes. Imagine a city surrounded by an amazing landscape where gorgeous mountains meet the ocean. That’s what you will see as you descend from Signal Hill or Lion’s Head as you paraglide. Although it’s expensive for $85-100 for tandem flight, I believe it’s worth the experience, the view and that adrenaline rush.

3. Take a trip to the Boulder beach to see the penguins.

All my life, I thought I could only see penguins in Antarctica. So imagine my surprise when I learned that South Africa (of all places) have their own penguins. Simon Town where the Boulder beach is, is only one hour away from the downtown. And Boulder beach does not only have cute penguins (although they are stinky AF), the boulders are also pretty amazing and quite a work to get to.

Tip: Make sure to take the Victoria Road going to Simon Town, the one hour ride will be worth it.

What’s Africa without the safari right? Or as South Africans call it “going to the bush”. If there’s one thing that I will never forget is the experience I had with these animals in the wild. Especially rhinoceros – one of the most endangered species in the world. They look gentle despite their size and the intimidating horn. According to our guide, they give a signal before they charge. Well, at least they are considerate unlike the poachers who kill them. So if you want to join a safari, make sure the tour company also support the conservation of these animals and not just up for profit. We had a safari game drive through Kumba Safaris and Adventures who teamed up with Aquila Private Game Reserve for the joint conservation effort for the rhinos.

South Africa is known for wine. With their massive wine lands scattered in the country, that’s not surprising. Constantia wine farms are the closest to the city but Stellenbosch wine farms are the real deal. It’s a bit further, but like other places in Cape Town, the route is very scenic you won’t even notice the long drive.

Bo-Kaap is known for their instagram-ish colorful homes and cobbled stones streets from the 18th century. But this heritage site is more than these cute houses and the steep roads. It used to be the center of Cape Malay culture – a term used for the early members of the community for foreign slaves that were imported by the Dutch between mid-17th century to early 19th century. So aside from taking an instagram picture of the houses, try to visit the museum as well.

7. Take a stroll in Waterfront

Cape Town’s Waterfront is the most alive and the prettiest waterfront I have seen (sorry San Francisco but you have to move over). When I first went to the Waterfront, I wondered if I was still in South Africa. The malls are very modern and the architecture is very Dutch-y. It’s nice that they have a massive selection of shops, restaurants and activities around the area. I could spend a day there without getting bored: it maybe just watching local musicians, the birds, shopping or eating.

8. Hike in the Pipe Trail

When my friend told me she was in charge on my last birthday, I just let her plan our day. And one of them is we walked/ hiked her giant dog along Pipe Trail. A 10-km hike was farthest in my mind to start my birthday celebration but I’m glad we did it. From the time we left their posh neighborhood to the foot of Table Mountain, Kloof Nek and eventually Camps Bay, I was amazed by the view of the city, Table mountain, the ocean and the Twelves Apostles which is an extension of the Table Mountain but more scenic with Atlantic and million dollar houses on its feet. Did I already mention Cape Town has an insane landscape?

9. Visit the Central Business District and street markets around

I normally don’t like CBD’s because they lack character. But Cape Town’s CBD’s is one of the most charming I have seen. The English, German and Dutch influences on the architecture are too obvious one would think they are in European city rather than an African city. One can enjoy a nice stroll between quaint cafes and charming market stalls for handcrafted arts and clothes. And if you walk a bit further, you’ll find quiet parks where you can enjoy smelling the roses or chasing squirrels.

10. Take a day trip to Hermanus

Hermanus is another city in Western Cape province which is about 1.5 hours away from the center of Cape Town. This town is known as holiday town for the locals and I mean rich locals. Known for almost all types of whales watching/ diving, this place is paradise for those who love the ocean and the adventures it brings. And like Cape Town, Hermanus has a nice landscape of the coast, of the mountains and valleys. The town is also known for Clarence Drive which is voted as the most scenic drive in the world.

If you want to see more of the these cool things to do in Cape Town then watch the video below.

A Weekend Adventure | Kayak To The Penguins