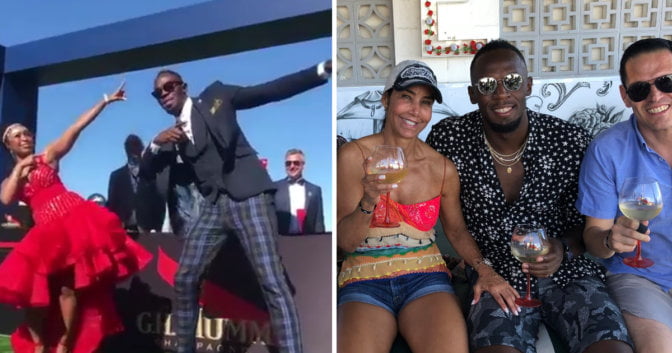 The retired Jamaican World record holder and gold medal Olympic sprinter, Usain Bolt arrived at the Kenilworth Racecourse in Style on Saturday the 27th of January to attend the 2018 Sun Met held in Cape Town.

The legendary Bolt arrived at the 134th edition of the Sun Met by helicopter after enjoying the amazing views as he flew over the Mother City.

Usain was appointed CEO of Maison Mumm champagne last November, and it served well in the celebrations that night as he hosted the event. The Olympic athlete seemed to be enjoying himself at the Sun Met and even mingled with some of the locals showing off his moves as he danced to African beats.

In a recent interview, Usain said that after retiring he still likes to keep fit and that he’s pursuing soccer as his next career move

Making tracks…Usain Bolt steps out stridently across the racetrack after arriving by helicopter to attend the 134th edition of the Sun Met celebrated with Mumm at Kenilworth Racecourse on Saturday. @AfriNewsAgencypic.twitter.com/Ioj6VZmmLv

CapeTown from the helicopter view pic.twitter.com/DmF0OtnV3l

A post shared by ZiyaadDouglasPhotography (@ziyaaddouglasphotogpaphy) on Jan 28, 2018 at 1:02pm PST

I beat @usainbolt …..at being tall last night. Epic night wow. Met the number one person on my list of people to meet and my biggest sporting hero,I fan girled so hard. #usainbolt #sprint #myhero #fangirling #athletics #athletics